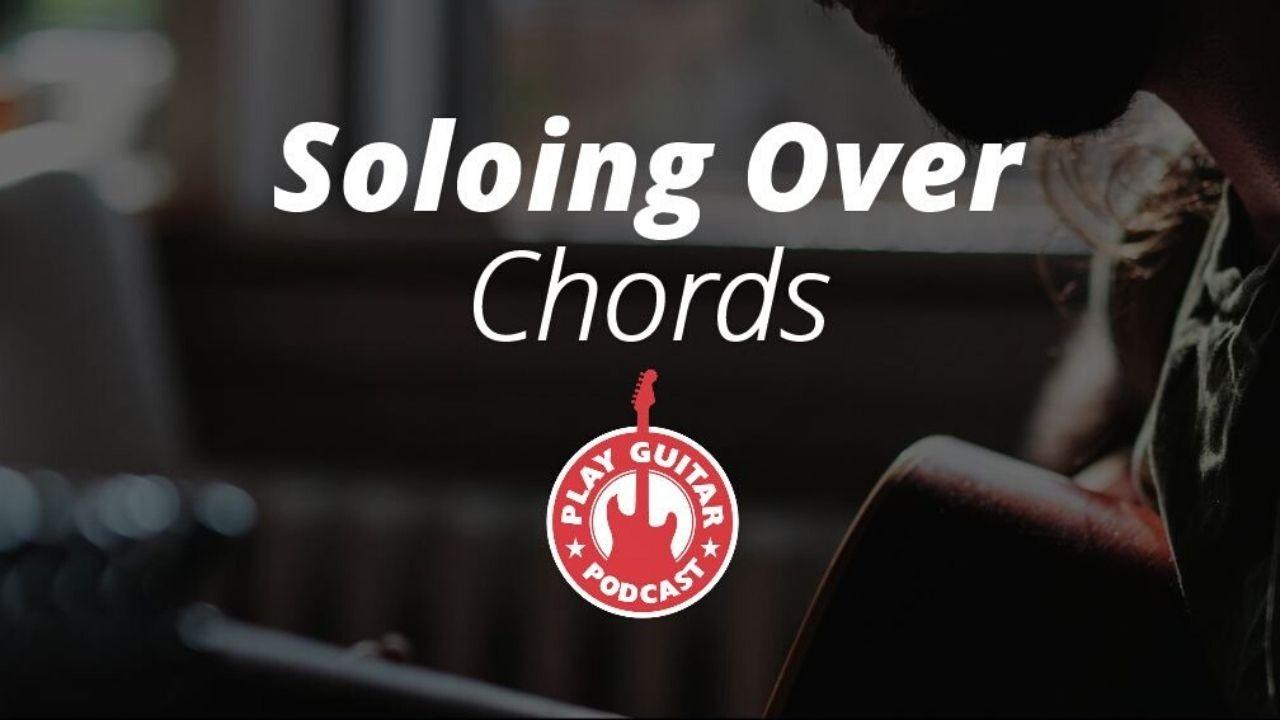 One of the great joys of playing guitar, to me, is improvisation.

Creating new and unique melodies on the guitar can be addictive. Once you get to the point in your guitar journey where playing lead guitar becomes a priority, you are faced with a whole new set of obstacles.

Most new players that are interested in lead guitar start by memorizing the tablature of their favorite lead guitar parts.

That is fun for a while. You get up and running fast. All of the notes sound great and match the chords of the song perfectly!

What’s not to love! After getting a good group of leads memorized, most new lead players are ready to take the next step: Improvisation.

This is the point where things start getting really tough. You may start asking yourself questions like this:

The more you try to play, the more you struggle. Eventually, you finally ask yourself this question:

“How do my favorite guitar players come up with this stuff?”

How does playing scales over chords work?

Once you understand the HOW and WHY of playing lead guitar melodies, you will be on the fast track to guitar success.

This post is part of a larger series of articles that deal with “the best way to learn guitar scales. Here are the “Six essential steps you need to really understand how to use guitar scales“:

We have made it all of the way to step five: Start playing those patterns over chords. This one step is so very important. Anyone can memorize a bunch of scale patterns, but using them and making them sound great is a whole different story.

If you haven’t learned steps one through four, I suggest you look back now before we move forward. Click here to start:

You need a strong foundation and you need to build from the bottom up. If you are missing any of this foundational information, playing over chords will quickly feel very complicated.

Just take a quick look over the past steps and you will be ready to take on “playing scales over chords”.

Today you will learn the different ways of playing lead parts over chords and the essential steps to take to match your scales to different songs!

When to start learning to play scales over chords

In my small group classes, right after I introduce the minor pentatonic scale, I get them started right away with improvising.

I loop a chord and then I say:

“You can play anything you want at all with the scale. You can skip notes, repeat notes, go up the scale, go down the scale. It doesn’t matter, get creative with it. Play one note one hundred times.

But when your are finished saying what you want to say, hit the tonic note. Just like you were putting a period or exclamation point at the end of a sentence.”

Try this out yourself. It’s really fun! Go ahead and loop a A7 chord , or find an A7 backing track. Then slide the A minor pentatonic pattern 1 to the fifth fret.

That puts the root of the chord and the tonic of the scales on the same note. Start improvising!

Here is a good A7 background track to use:

After everyone plays this for the first time, you wouldn’t believe the smiles that start popping up around the room. The scale matched the chord. All of the notes sounded great and when they hit the tonic note at the end of their improv, their melody line felt like a completed sentence. The musical statement was over and they were ready to create the next one.

You wouldn’t believe how effective and fun this is.

This is just how I get my students started. To go farther down the road, we have to have a plan.

It is not often that you only have to play a scale over one chord for a whole song.

With more complicated chord progressions and even key changes, moving forward from here can be difficult. So lets find out the different situations you may find yourself in, and the ways to approach playing over different chords.

Once you start improvising over many different songs, you will find that it’s not “one size fits all” It’s not always as easy as we did above. There are several different scenarios that you will find yourself in.

Here is what you can expect:

So, now that we know what we are up against, lets create a plan for using scales in all of these situations.

Situation one: Playing over a single chord

In modern music, you may find yourself in this situation a lot. It could be a funk song, rock song, modal blues solo passage, even part of a folk or country song.

No matter what style of music you are playing, you have the same problem: How to come up with a solo over one chord.

Is it some type of Major, minor or dominant 7th chord? In this article we are going to stick with the “Big Four” scales that we went through in last weeks post.

For a Major type chord play either the:

For a minor type chord play either the:

If you are playing a over a dominant 7th chord you can play either the:

**You can also play the “Mixolydian mode” over a dominant 7th chord. This is a pretty complicated title for a really easy scale.

The easiest way to make this scale is to take the major scale and lower the seventh note by one fret (half step). ( in the key of C the seventh note would be a B. You would lower that note one step to Bb. Now your C mixolydian would have the notes C D E F G A Bb C. That would fit perfectly over a C7 chord.)**

Once you figure out what scale to play, you just have to match it to the chord. On guitar this is easy. Just find the tonic note of the scale

pattern you are playing (it is usually highlighted) and slide the pattern up the guitar until that note is the same of the root of the chord.

Situation two: A chord progression that only requires one scale

I find this to be the most common situation my students deal with.

This where you have to play over a group of different chords, but the

chords are all related in a way that one scale works for all of them.

Playing over these are a lot of fun and super easy! You just find the key and play the appropriate scale, and it just works!

Usually these are called Diatonic Chord Progressions. What that means is that all of the chords are created from notes in the Key.

The notes in the key of C are:

So lets look at an easy Diatonic chord progression in the key of C Major.

Another way of writing this chord progression is:

The three notes in a C chord are C E and G.

If you check the C scale above, it contains all the notes of all the chords. These chords are related to the C major scale and sound great

Another type of chord progression that you can use one scale to play over is a blues. Try the minor pentatonic or the major pentatonic

that matches the key of a blues progression over the chords for some fun playing!

Situation 3: The chord progression that almost works for one scale.

This has happened to me so many times.

I’m playing a song that I thought would be easy. I’ve matched my scale to the chord progression.

Everything is going great and then it happens:

One of the chords from the song doesn’t match the scale I’m using.

Those were serious wrong notes in the middle of a great sounding solo.

When I first started playing lead and this happened, I would just panic. The next time that chord came around, I either:

Those are both good quick fixes in a pinch. But, taking the time to really understand what to do when you have one of these “outside”

chords is worth it in the end.

Now, I love it when I run into one of these difficult chords. I think of it now as a featured chord. It’s something I can call attention to and try

You have to temporarily change your scale for just this chord.

The easiest thing to do is play the arpeggio (chord notes) of that chord. That way you are guaranteed not to play a wrong note.

But, try changing the scale altogether.

major, but it is not made from the D scale. Lets look at a D scale:

The notes of a C chord are C E G. The C from the C chord doesn’t match the C# from the scale.

IF your chord progression was:

change creates a new scale. It temporarily puts you in the key of G major. And that matches both the C and G chord as well.

Although most popular music generally stays in one key for the whole song, that is not the case for all music.

It isvery common for one piece of music in Jazz to modulate to several different keys. To be a confident Jazz guitar improviser, you must be

Essentially, you follow the same procedure as in situation 3. You analyze the chord progressions ahead of time and see where the chord

changes go into new keys and make the appropriate changes to your scale patterns.

The simplest song to demonstrate this is “Blue Bossa”.

But in the middle section there is a modulation to the key of Db Major, using the chords Ebm7, Ab7 and Dbmaj7.

After that it modulates back to the key of C minor, using the Dm7b5, G7alt, and back to Cm7.

transition back to your C minor scale patterns.

As you can see, even in a relatively easy song as this, shifting from one scale pattern, into a new key and then back again would take a lot

of practice and patience to do well.

Learning to play scales over chords is one of the most enjoyable things you can do with the guitar.

Learning to improvise with the scale patterns we have learned, takes time and is well worth it!

We talked a bit about how to start improvising over a chord progression.

We also went through the four types of chord progressions that you will be dealing with, in order from easiest to most difficult.

Playing scales over chords gets easier the more time you spend with it.

If you are new to this idea, start matching your “big four” scales to background tracks and have some fun.

If you incorporate this in your daily practice routine, you will find it wont take long before you are improvising awesome melodies with the guitar!

What has been your experience with soloing over chord progressions? Let me know in the show notes below!