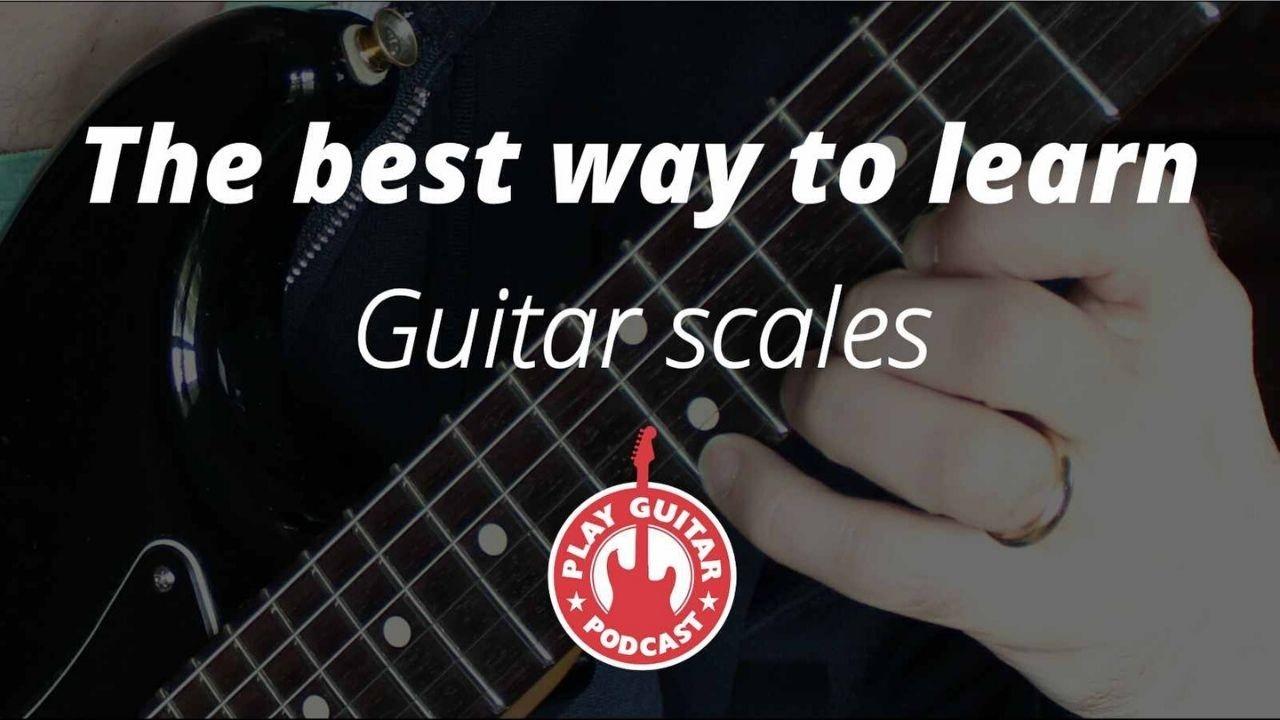 Welcome to part one of my guide on the best way to learn guitar scales! 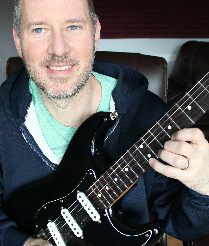 I’ve found that most of my new students who come to me already learning scales and lead guitar on their own, are generally frustrated.

Over time, I could see that I kept teaching the same basic concepts, over and over, to get these guitarist out of their rut.

I took all of these basic ideas about why and how guitar scales work and formed “my six step plan to learning guitar scales.”

My original idea was to share this plan with you in one blog post. But, by the time I finished, I realized that, to get the information out that I wanted to bring to you, I was almost writing a book.

So, I’ve broken it down to several easy to read posts.

In this first post, we have an overview of the six key concepts that you need to know to learn scales on the guitar. After that, we will work our way through the first three steps.

The rest of the six steps are coming soon in my next several posts. Lets get started!

What is the best way to learn guitar scales?

I’ve found that strumming chords is usually the first thing new guitarists are interested in. But, after a while, there comes a time when most start thinking about playing melodies and guitar solos. 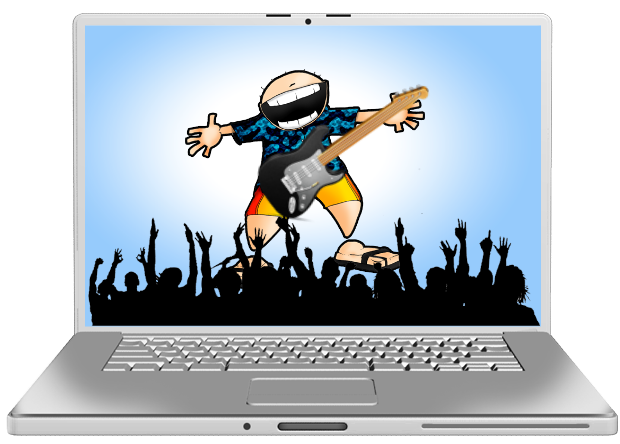 Hearing these soaring electric guitar solos and beautiful acoustic melodies can be very enticing. They sound effortless and fun.

… Answering the call to be a lead guitar player can be a hard road to travel. Especially if you don’t have a set plan!

I’ve had many frustrated new students come to me after picking up a few minor pentatonic or major scale patterns. They can play them up and down but soon find out that just being able to play them is not enough.

I almost always say: “Woah… Slow down there!”

“Before we start using these patterns to make our own leads, there is some important information that we need to know“.

To get the most out of these patterns, you need to know WHAT they are and WHY they work. Understanding this makes all of the difference in the world.

This is the stuff that your favorite players know. This is how they can come up with so many licks that always sound great but never sound like they are copying any other players.

So lets take a look at this super important information. I guarantee it will put you on the fast track to success with playing lead guitar!

My favorite way to help my students get started understanding and using guitar scales is to follow this six step plan:

I’ve seen so many students have their “light-bulb moment” after working their way through these steps. It’s like someone switched on the lights in a dark room and everything became clear and made sense. They were finally on the right path!

So, if you are struggling to understand how scales work on the guitar, read on below to start working your way through this super informative and helpful plan.

Step one: Understand how the fretboard is set up.

One of the first things I teach to all of my new students is how the fretboard works.

At first, the guitar fretboard seems overwhelming. So many notes on six different strings. It might seem that the notes on the fretboard are just a jumbled up mess.

But that is the furthest thing from the truth.

The guitar fretboard makes sense. Once you understand a few basic concepts.

I have recently posted an article, “How do I learn guitar notes on the fretboard”. 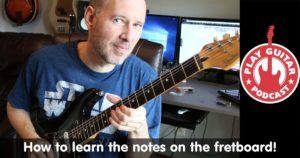 It goes, in depth, over these things you need to know about understanding how the fretboard works:

If you are unsure or need to brush up on any of these topics above, I would recommend that you quickly pop over to this article.

==>> How do I learn guitar notes on the fretboard

Now that you are back… it should be obvious that the way the guitar is set up makes sense. Once you understand the chromatic scale and the relationship of how the notes on each string overlap each other, it’s not difficult to figure out any note on the fretboard.

It’s also very obvious that there are a whole lot of notes on the guitar and it is very difficult to visualize them all at once.

Step two: Understand what scales are and how they are built

First off, we need to know exactly what we are dealing with. To break it down as simply as possible…

…a scale is a group of notes played, usually in order by pitch, one after another that sound good together. You could say that they ”match” each other.

You will usually hear scales practiced from lowest to highest note (or the reverse highest to lowest note). Although scales may be practiced that way, that is not the way they sound the best.

In melodies, guitar solos, bass lines and counter melodies, scales tend to jump around between notes. If a melody just traveled up and down the scale, it wouldn’t sound very pleasing to the ear.

Scales are different than chords.

The group of notes in a scale are meant to be played one after another. This is different than chords. While chords, like scales use a group of notes that match each other, Chord notes are designed to be heard all at the same time.

If you are unfamiliar with or are interested in learning more about chords, I have a whole article on understanding what chords are and how they are constructed. 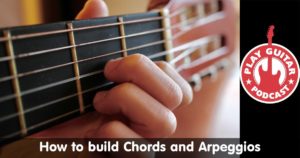 It is a companion article to this one and you can find it here:

==>>How to build chords and arpeggios on guitar

How are scales built

The best way to understand how scales are built, is to jump right in and start building! Lets build a C Major scale all on one string.

Grab your guitar and lets Go!

What do you think? Sound familiar? What you just built is a C major scale. Most people recognize this as the “Do Re Mi Fa So La Ti Do” song from vocal warm ups or from the song in “The Sound of Music”.

How did we do this? We had a starting note and then continued, in order, by sliding up either 1 fret or 2 frets to the next note in the scale.

Knowing when to use either the distance of 1 fret or 2 is the trick to being able to make a good sounding scale. To know which one to use. We need to understand something called intervals.

What is an Interval in music? (half steps and whole steps)

An interval is very simple.

It is the distance between two notes. There are lots of different intervals with different sounds and distances. They all have different names that relate to the sound they make.

For our purposes today, we will concentrate on only two intervals. The two intervals we are going to need to build this scale are the:

Major 2nd and the minor 2nd.

The interval of a Major 2nd on the guitar is the space of a 2 frets (commonly called a whole step).

The interval of a minor 2nd on the guitar is the space of 1 fret (commonly called a half step).

Notice that when we built the C Major scale above, we only moved either 1 or 2 frets between notes. Those are our half steps and whole steps.

Different scales have different combinations of half steps and whole steps. That is what gives each of them their unique sound.

In my next post, we will find out the different combinations of half steps and whole steps that make up the scales we need to play the music we want.

(If you are interested getting more in depth about intervals, stay tuned for my upcoming article all about intervals and how they relate to the guitar.)

Step 3: Know the best scales to learn for your style of music

There are LOTS of different scales. In my journey with the guitar I have learned many different ones.

From time to time I use all of the scales I have learned, but, I have found that I generally use certain scales for certain styles of music.

Today I am going to focus on the scales that are used the most for popular music:

I plan several articles on the best scales for other types of music. I will link to them here when They are completed.

What are the best guitar scales to learn for popular music?

When I’m playing or teaching popular music, I always focus on the Big Four:

If you have listened to any popular music, you are familiar with the sounds of these scales.

The Major scale is a happy sounding scale. Most people relate the sound of this scale to the “Do Re Mi Fa So La Ti Do” song.

The Natural Minor scale is the most common scale to play to get sad sounds. It is also used in a lot of hard rock songs.

The Major Pentatonic scale is a slimmed down Major scale. It is used in Country, Southern Rock, Soul music, and some blues.

The Minor Pentatonic is a slimmed down Natural minor scale. It is used primarily in Blues and Rock music.

Being comfortable and confident all over the neck of the guitar with the big four will give you most of what you need to play lead guitar in popular music.

But not only that! Knowing these scales can also help you with reading music, songwriting, creating and learning vocal melodies, vocal harmonies and bass lines

Make sure you check out Part 2. That’s where I go, in depth, through each of the “Big Four”.

We breakdown each of these scales and find out:

Another great page that can give you a solid start with scales is Justin Sandercoe’s Scales Index page. I highly recommend taking a look through his scale basics and commonly used scale pages.

Thanks for reading part one of my Six step guide for the best way to learn guitar scales!

Someone once said that “a little knowledge can go a long way”. This is very true when it comes to learning scales on the guitar.

Just memorizing a few scale patterns doesn’t give you the whole picture.

The information in this, and the next few posts, will fill in the essential information that you need to use these scales effectively in your own music!