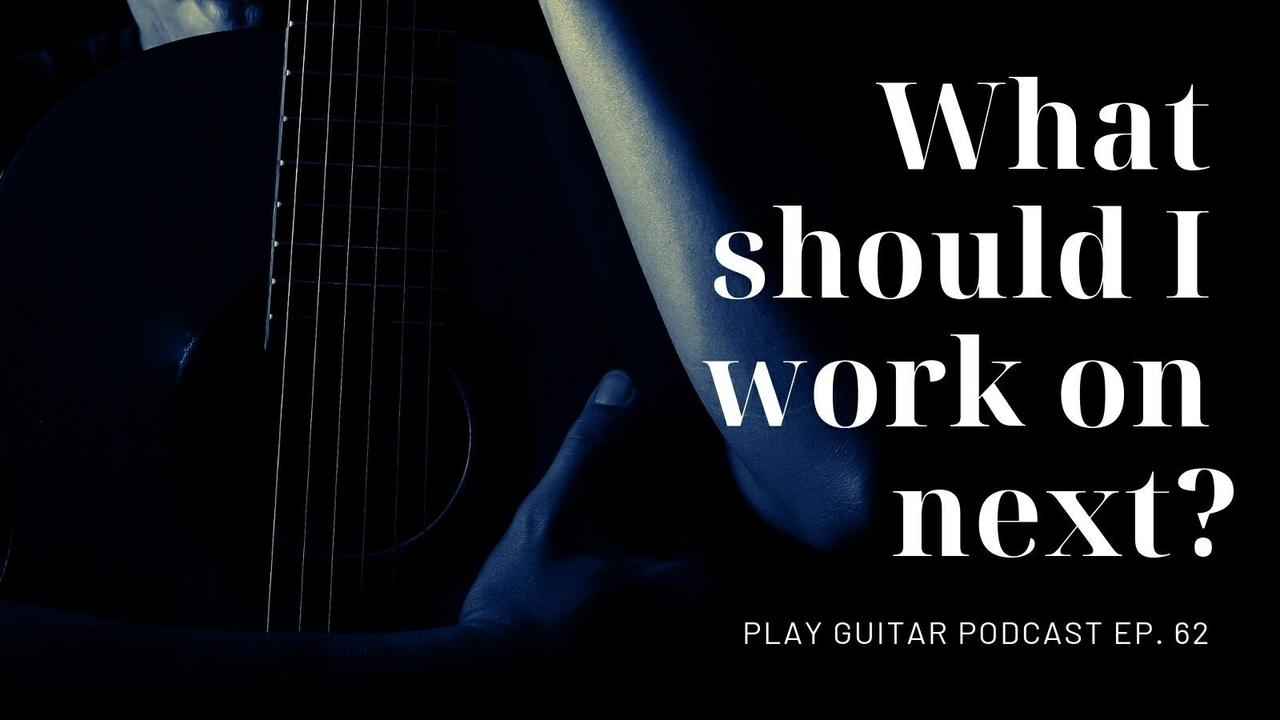 It’s a question I get all of the time. Today, I give a system to put your guitar practice back on track!

What should I work on next?

Well just like playing music, there’s not just one thing to focus on. We’re bringing different things together. We’re combining different skills, different sounds, and  different ideas all into one creation: which is a song.

I’ll give you the answer right away. Take a look at these five areas and give yourself an honest assessment as to where you are with each of them.

Take a hard honest look at those five areas in your guitar playing and gauge how you are doing in each one.

Find out what Basics you’re missing, take a look at my recommendations below, and then decide what’s the best next step for you.

It’s a group of things that a performer is ready to perform, at anytime. In our case, that would be a group of songs. A group of songs that are ready to go at any moment. It’s not pieces of songs, but a whole song, from start to finish.

Why is it important to have a repertoire of songs?

Songs are the main vehicle in music.They are currency. Songs are valuable.

Only learning a part of a song, that’s not a problem in itself. The problem is that if that’s all you do, you’re really missing out on a lot.

If I said to you, “Hey let’s learn a song today!”, what song would you pick? Be realistic about it. Most would pick songs well past their skill level.  That’s wonderful because that sets  a goal that’s something worth working on.

But, what I’m talking about is a different thing altogether. You don’t have to live on the edge all the time. You can have songs that you are comfortable playing. In fact, an audience is better served if you’re confident in what you’re doing.

You can see someone who is confident.  You can hear it, and you can feel it. Performing is a big part of being a musician and it should start right at the beginning.

Have you ever really wanted to learn a song? You found the music, you found the tablature. You went right to that cool part, you learned it and then you disregarded the rest of the song. You moved on.

This is a conquest that’s very one-sided. If you’re only interested in seeing if you can do something, that then that’s fine.  But, you’re leaving half of the experience about being a musician on the table.

We’re not just guitar players, we’re trying to be musicians. It’s telling the story of the song in a compelling way that’s what we’re after. The way you play contributes to the overall emotional experience of the song and it happens in a big way. It’s taking all that you’ve learned and presenting it in a certain way to make the song ideas and the emotions very powerful.

When you’re trying to get the story of the song across, what’s important changes. So making a point to start building your repertoire right in the beginning, is going to get you really far.  If you start putting the song first, it will change the way you think of the guitar and it’s going to open some doors for you that would otherwise be shut.

This is not an advanced thing at all. You can start learning to play whole songs right away. Easy songs can be just as effective as a difficult ones for a listener.

In fact really complicated complex songs will turn off a lot of listeners. So whoever you are, and whatever level player you are, if you want to know what to do next, the first step is to learn or to write whole songs.

This instantly puts you on the path forward. It’s like pushing down the gas pedal.

Did you ever get this question: “Aren’t you learning how to play the guitar?”

If so, you might have answered this way: “Well, I am but I don’t know any songs yet.”

It’s a great idea to start playing for others as soon a possible. Try to find songs that are fun and easy.

Just look up easy songs for beginners on Google. There are millions of them with just a few chords.

How do you get ready for that?  Well you figure out what the chords are and you play along to the track.  ALso, if you want to find someone who sings (if you don’t sing) and get together with them to play these songs. It’s a very healthy thing. It’s fun to get together with other musicians and just play. It relieves a lot stress and it’s easy to play some great sounding songs.  Start building a group of songs that you can play easily, for anyone who will listen.

The biggest challenge for an intermediate guitar player, to me, is that transition from being a practicer to a performer. So many really good guitarists have never progressed because they’re not used to, or they’re scared of,or they have some sort of aversion to playing for people. If they had worked on this from day one, it makes your musical life so much easier.

For the intermediate guitarist, start thinking of these grouped into sets of 10 to 15 songs. Think it through what would be a good group of songs for you to perform in the style you choose.Choose a group of songs that you could build a band around. This gives you a great starting point.

You might also be tired of playing. Try, if you’re bored with what you’re working on, building a new repertoire in a style that you’re unfamiliar with. Get yourself uncomfortable and start learning again.

Is there a right or wrong way to play guitar?

What do you think? To me, there’s no real rules. We just have others who have come before us. Players who have found a way that seems to get the best results for things like picking, hand placement , finger independence, arm position, hammer-ons and pull-offs, slides and bends.

What is important about Technique?

Stamina: If you’ve ever had a really long practice session, and later on you find that you’re arms are sore, you wrist hurts, and maybe your back hurts. Regular technique practice can help your endurance and keep you from out of shape soreness.

Keeping your muscles in your hands and wrists toned and loose is a wonderful side effect of technique exercises. Remember back when you started. Remember all the pain that you dealt with when you first started playing guitar? Playing with a proper form or a way that doesn’t promote injury, is super important.  Consistent practice of technique exercises can help you be prepared and injury free.

Being  present in the music is another great side effect, as well. When you’re constantly focused on if you’re going to be able to pull off a cool lick, you’re not really focused on the song at hand and what’s going on around you.

Being able to put the mechanics of playing on autopilot, so you can focus on other things like harmonic ideas, scale choices, or chords,

The technique issue for beginners is usually left and right hand coordination.

If you’re struggling with that right now, look no further. That’s the place to start. Making sure your left and right hand are in sync is super important and one of those things that we need to build a strong foundation.

It’s really about getting around on your instrument for the intermediate player.

Also, intermediate players usually need to get used to the different positions that your hand is going to be in along with some stretches and bends.

Technique for advanced players revolves around pushing the boundaries and refining neglected technique.

Advanced players rely on a lot of different techniques to get their point across. When you have a whole lot of different things that you do, but haven’t used them in a while, periodic maintenance of your different playing styles, is very important.

So that’s my answer for the question “What should I work on next?”

Today, I separated my answer into five different sections:

Make yourself a  practice schedule sheet. Separate each day’s practice with these 5 sections.

For each practice, be honest with yourself as to what you need to work on to improve each section.

Start your daily practice routine and spend time on each of these subjects. Or, you can split each section up over the week.

If you do this I guarantee you’re going to be off to the Races!

Have you ever felt like you didn’t know what to work on next? Did you get confused as your as to which way you should go with your playing? What did you do to start moving forward on the guitar again?

We would all love to hear about your experience! Please let us know in the comments below.