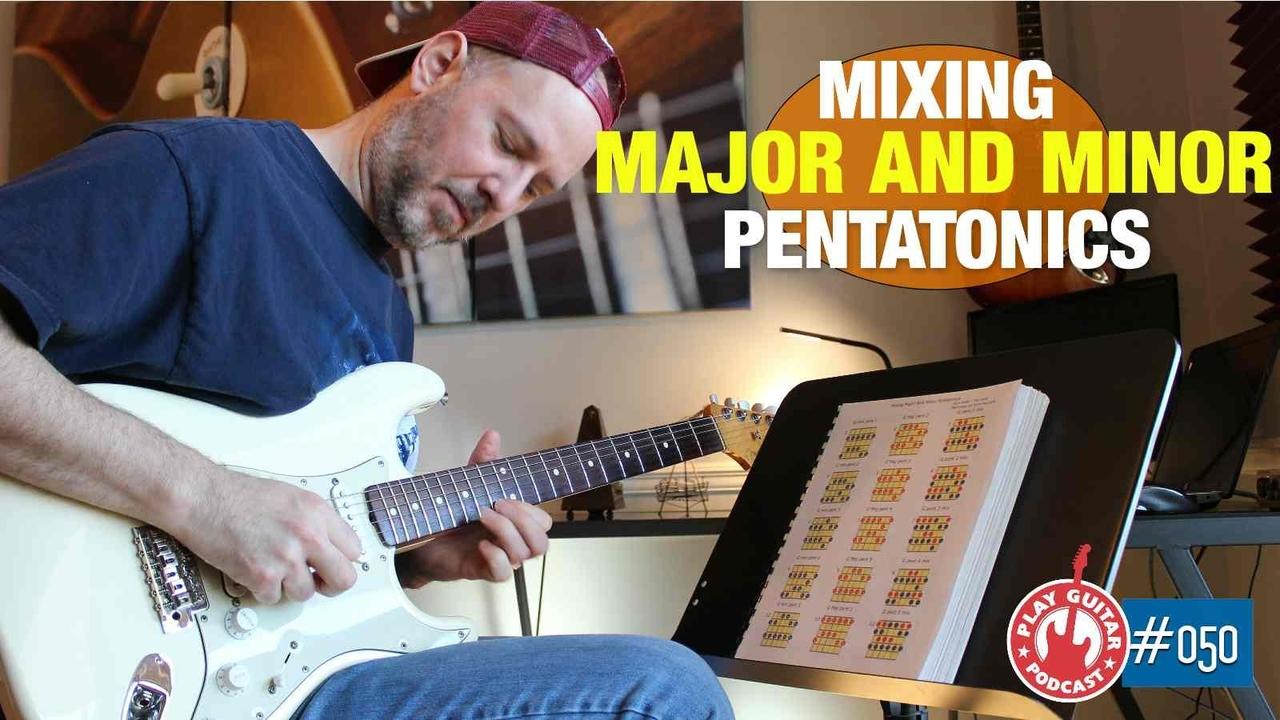 Today, I go over the how and why of mixing major and minor pentatonic scales.

What is it? What is that sound? That sound that you can’t quite put your finger on?

It’s not a really tense outside sound. It’s not shocking to the ear, it just pulls at the ear a bit.

It is a collection of notes that takes advantage of all of the different moods and feelings that are common to a style of music. The difference is that the lead player seems to have them all at the same time.

They are note choices that seamlessly blend the happy, sad, angry, and sweet sounds that we enjoy. And these notes flow from one feeling to the next without hesitation and take your ear on a sort of journey.

You may have heard it in a blues tune or a classic rock, country or bluegrass song. These sounds take some of the standard tones we are used to and weave a line that is both complex and pleasing at the same time.

If you have ever tried to transcribe some of these lead lines, you may start to find that they don’t line up perfectly with just one type of scale. Once you think you have it figured out what scale is used, you find some notes that just don’t fit your scale patterns.

What is that? Where are these notes coming from? Why do they sound so good? How do I use these sounds in my own playing?

But the entry into this world of blending sounds is not as difficult as you think. And you can use scale patterns that you most likely already know to get started. Were going to talk about mixing Major and minor pentatonic scales.

There it is: the starting point for moving past the pentatonic cell block.

Let’s get some different sounds today and get our ears used to hearing something different coming out of our amps.

The Magic of the 7th Chord

This is where I started, on the 7th chord. It not sad and not exactly happy. It’s a little tense and a little bluesy. Perfect for me!

I was used to the idea that you played major on the major progressions and minor on the minor progressions, and that was that. When I started experimenting over the 7th chord I discovered that it was very forgiving. You could get away with a lot of stuff and still sound good.

I played my major pentatonic, minor pentatonic, diminished, and mixolydian scales over it and they all sounded different but great. They all worked in their own way. And this wasn’t just for Blues. I started just waiting for a 7th chord to come around in any style of music I was playing, so I could start using these cool sounds. And guess what: this worked too!

And the farther out I went, the more the 7th chord could take. It is a very resilient sound. I noticed something else as well. The more confident I was the better it sounded. It seemed like I could playing anything over one if I played it with confidence… attitude.  It was open, There were no rules, just tendencies. This scale tended to sound one way where another sounded another way.

So, let’s realize this in advance of what we are about to do. If you start using these examples and they don’t sound great at first… give them some time. When you are unsure about these new sounds they tend to sound unsure. The more familiar you are the cooler they sound. So, don’t give up too soon.

All of the notes

So getting started with mixing the Major and minor pentatonic, it’s easy to start off on the wrong foot. Just combining all of the notes of both scales and making a new SUPER scale is not the best way to do it. Maybe over time you will be able to handle that kind of thought, but in the beginning, there is just too many notes to wrap your head around. This isn’t the best way to start out. It is also tough wrap your head around because these type of blended scales make it hard to distinguish between the stronger and weaker notes. Giving you the tendency to land on too many weak notes and sound sour. It is easy to lose the guide notes, the chord tones.

On the sheet below, I have put the Major and minor pentatonic scales that fall in the same areas together for you. It’s a great way to visualize where both scale patterns fit together. I have also combined them both in the last column. We are going to use that, but before we do, take a look at it and see what I mean. It’s a good bit of notes and without a method, very hard to make that scale sound good. 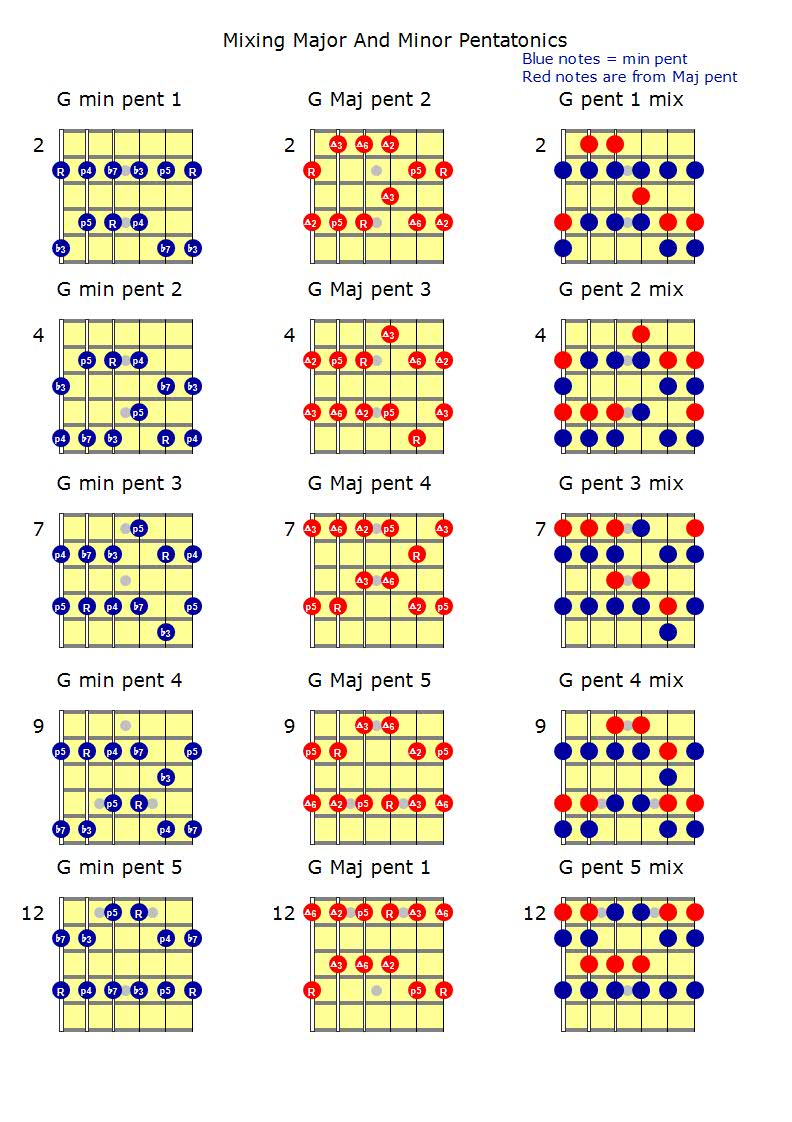 The best way to get started with this idea is to relate patterns. I’m going to choose the key of G for today’s examples. I chose G because it lines up well on the guitar. We can start with minor pent pattern 1 on the 3rd fret and work our way up the patterns to pattern 5 at the 12th. Very easy to keep straight.

Before really using this we are going to have to make sure our pentatonics are straight. If you are unsure of all of the patterns of the pentatonic major and minor scale, you are in luck. Just visit playguitarpodcast.com/scales and that will have all you need to know to get started mastering the fretboard.

We can also start the mixing process as we do this.

Let’s start at the 3rd fret. G minor pent pattern 1. Play it up and down over a 7th chord backing track. Keep the track going and play G Major pent pattern 2 next.

What did you hear? What were the differences? Think about the way each scale made you feel.

For me, it’s night and day. Even though we are playing over the same chord, the sound of the Major is very sweet, where as the minor is rough and straight ahead. Imagine if you could blend the two, like spices in a soup, to get just the right amount of each to make a very unique sounding phrase!

Each pattern area is host to both a Major and a minor pentatonic scale pattern. Having these both under our fingers is super helpful once you are solid with the scale patterns.

So practice both of these over a 7th chord in each position.

Apply To a Chord Progression

After you are pretty confident of being able to play back and forth in each of the five positions, It’s time to take the next step.

The exercise is to play the Major pentatonic any time you have a G7 chord. And the second part is: play the minor pentatonic over everything else. Keep all of your scales in G for the time being. We will deal with changing scales per chord later on.

Let’s give it a try with the first patterns we talked about. G minor pent pattern 1 and G Major pentatonic pattern 2.

Try this with all of the patterns. If you practice this regularly, you will start to become really familiar with the differences between the two.

The last exercise kept us thinking in G, but in this one we will start changing the scale depending on what chord we are playing over. Staying with our 12 bar blues in the key of G, we can set some new limitations.

So getting familiar with changing back and forth from major to minor pentatonic has got us underway. But what about truly mixing the scales. Being able to get that sweet major sound for a few seconds during a predominately minor solo.

This is where this starts getting fun. We did a little of this back in episode 16 and it’s a great thing to have in your bag of tricks.

Try playing over a G7 chord with the minor pentatonic and start adding some of the red notes here and there. Experiment with them to see how they sound and add to the overall sound. Pay special attention to where the Major 3rd is. That is most likely going to sound like the strongest note to mix in to you (we have talked before about the relationship of the major and minor 3rd in blues).

In fact, check out the song Johnny B. Goode. The signature opening of the song uses these extra notes, including the major 3rd along with the minor pentatonic to create one of the most iconic guitar licks of all time.

Mixing in these notes is super fun in a place that is commonly known as the BB king box. This is a place on the B string where you can play the tonic note with your first finger. It’s great for vibrato and leaves all of your other fingers free to do a lot of cool bends.

In the key of G, your first finger is at the B string on the 8th fret. It is very easy to reach both the major and minor pentatonic notes on the two high strings from there without moving too much.

Here is some mixing with the bb king box:

As your techinque improves so will your ear. Just being able to play these scales is not enough. Once you get to the point that you can distinctly hear when a player goes in and out of them, it is easy to take what you hear and reflect it in your own playing!

So today, I went over mixing the major and minor pentatonic scales. I talked about:

Working on using the different pentatonic scales in this way is a great first step to breaking out of the most common rut that intermediate guitarists experience. I’m so glad that you joined me today.

Please let us know your experience with mixing Major and minor pentatonics, no matter if you are just starting or have been playing this way for awhile. You can share your story here in the show notes.