How to Play Over Minor Chords and Sound AWESOME! - 037 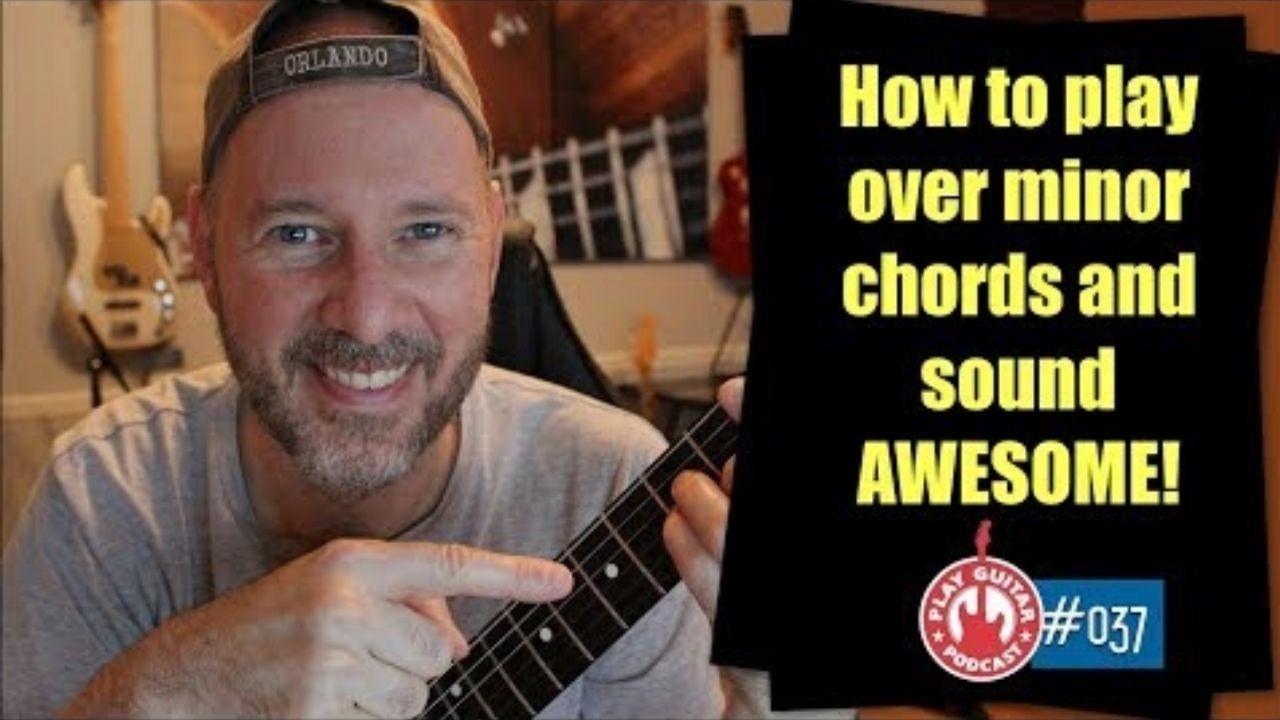 Today, I’m playing solos over minor chords! I show you how and what to play to make you sound awesome!

So let’s work our way, from easiest to the most challenging scales that you can use to sound awesome playing over minor chords. They are:

The minor pentatonic scale is usually the first scale that most guitar players learn when they start getting into lead guitar.

It is in music as different as irish folk to chinese folk to blues. It’s the peoples scale and it sounds good to us!

Well the pentatonic scale is just what it says. The penta prefix meaning five makes it a five note scale.

Those are all of the strong notes of the minor sound.

In fact, if you look at it , it’s basically the arpeggio notes of the minor 7th chord with the added 4th.  (It sounds a lot like that minor 11th chord I like so much).

Because the notes are so strong, so inside, it’s hard to make this scale sound bad. Its a very consonant sound over a minor chord.

how do I play it?

it’s the classic box pattern that you see all of the time.

To really show you the difference and to bring home the small changes between all of these scales, I’m going to keep all of these in A minor and based on pattern 1 at the fifth fret.

This way you will really be able to visualize how to make the small changes between these scales on the fly, whenever you need these different sounds.

It’s the minor scale that’s the basis for all that we are doing here today, and if you know a major scale then you already have the fingerings for the natural minor scale.

use pattern 1 of the C major scale and start back on the 5th fret of the low e string for our new tonic note.

The dorian mode comes from the major scale.  It is a mode that starts from the 2nd note of the scale.

In the case of C major you would start on the 2nd note of the scale, which is D – and make that the new tonic note.

You would use Dorian for a lot of different reasons.

The notes in the Dorian mode are:

It is almost exactly like the Natural minor except for the 6th.

The Dorian mode uses the  major 6 instead.

The structural notes  1,b3,5,b7 have not been changed. It still functions the same but the change to the 6th degree gives you a very cool blended sound.

There are two ways of thinking about approaching the Dorian mode:

1.   as an adjustment to the 6th of the natural minor scale.

It’s so easy to just find the 6th note of your Natural minor scale and raise it up one half step. You really don’t have to think so much , just change one note.

But, what you find when you are really familiar with your scale patterns, is that when you raise that one note, it starts to look very familiar. The new pattern looks just like one of the other patterns in the major scale:

2. That leads us to the other way to play Dorian as a mode of a parent scale As I said before it is a mode that is based off of the 2nd note of the major scale.

So you just need to do a little backwards thinking. Ask yourself: What major scale would I need to play so that the 2nd note is my new tonic?

The melodic minor scale is awesome  its a completely blended sound that has a lot of very cool uses.  It’s a complete combination of the minor scale and major scale.

You could use melodic minor over minor chords to get a different sound than the Natural minor.

You could also use it over min maj7 chords. It would match the maj7 note perfectly.

There are two ways to think about it.

Last but not least, the harmonic minor scale has a very cool classical sound that works so well over heavy metal!

It is awesome for fast runs when you are playing in 3 note per string patterns.

The big space between the b6 and the # 7 creates a very distinctive sound that is very interesting and pleasing to listen to.

So there it is the scales and modes you can play over minor chords to sound awesome!

I showed what they are, and the reasons why you would use them in different contexts.

Have you struggled playing over minor chords and minor chord progressions? Or, if you are good with minor, what are your favorite scales and modes to play in minor situations? Let me know in the show notes below: