How to Build Chords and Arpeggios 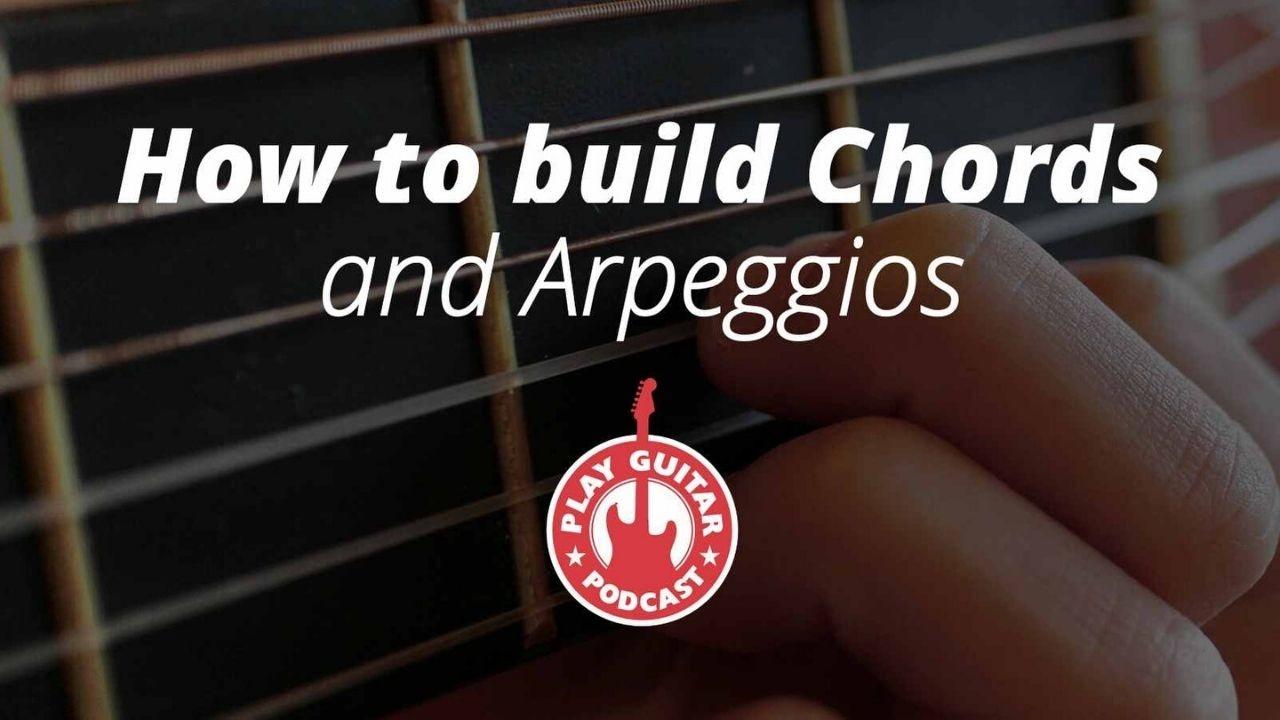 Welcome to my third article on the most important ways to open up the fretboard! In the first two articles I showed how knowing the notes on the fretboard and how practicing technique exercises give you an awesome boost to your guitar playing.

This week we will look at what I feel is the most common road block to getting better on the guitar:

Understanding what chords and arpeggios are and how they work

The first big hurdle a new guitarist makes when learning the guitar is usually playing chords. Learning the basic shapes can be tough. Making those basic shapes sound good… well, that is a whole other problem.

But, once you work your way through that beginning stage and get them sounding good, chords get a lot more fun. They open the gateway to hundreds of your favorite songs and a whole world of new possibilities.

So what is the problem with that? Not a problem at all! It’s awesome.

The problem comes a little farther on down the road.

…but it’s not the whole picture.

Also, when you start making your own melodies and lead guitar parts you notice that scales are very particular as to what chords and chord progressions match their particular sound. There is a reason for this but…

…we need some more information. We need to know how these things work!

I didn’t understand how music worked 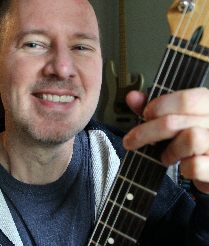 I started playing guitar when I was twelve. My private guitar teachers taught me lots of chords and lots of songs. After a few years of playing and memorizing chords, I started to see the common chord progressions that happened in a lot of songs. I could also see how these same chords worked in different styles of music.

I knew that there had to be a reason these chords sounded good together.

I also was playing my scale patterns that I had memorized. It was so much fun to make melodies over the songs I knew. I was starting to realize that every once in a while, there would be a chord that just didn’t sound right with the scale I was playing. All of the other chords worked, but this one chord just sounded “sour”.

I needed to know why some scales worked over some chords and not others.

Right about the time these questions started coming to me, my high school offered a music theory class. I signed right up. Although the focus of the class was more for classical music, the basic ideas applied to the music I was interested in at the time.

Within a few classes, I found out HOW these chords I had been playing were constructed and WHY different chords related to each other.

This was just what I was looking for. The things I had learned made sense now.

Before, the songs I had learned just sounded cool. Now, I new the REASON they sounded cool. I could take this valuable information and apply it to my own solos and songs!

I could feel myself becoming a better musician with each class. It was awesome!

Flash forward to now. I have been a gigging guitar player and teacher for over 30 years and…

…I’m still using and teaching this valuable information on a daily basis.

I find the majority of students who come to me now have memorized a lot of songs off of YouTube but are frustrated. They have no idea what chords and scales they are playing and don’t feel that they are understanding the guitar the way they should.

Today, I’m going to show you the first step that I show them.

How chords and arpeggios are built.

The basics of chord and arpeggio construction is not, by far, all you need to know about chords and scales. But, this first step will start you on the path to understanding the guitar music you want to play.

What came first: The chord or the scale

The chicken or the egg? Which one came first?

Well, that is a pretty tough one to answer. Luckily, for chords and scales it’s not that complicated.

Every chord you play is constructed with notes from a scale. If you are a beginner and not sure what scales and chords are:

If you are familiar with the piano, you will know that these are the notes on the white keys. These notes are also familiar to most as the…

Next, we are going to give each one of these notes a number.

These numbers are very important. Each number of the scale gives it’s note a certain job. Which number do you think is most important? Of course…

…1 would be the most important.

In a scale, the first note is called the ”tonic” note. It is also frequently mislabeled the “root” note. Although similar, the “root” note is actually the strongest note in a chord, not a scale.

This first note gives us the strongest sound in the group of notes. The “tonic” note commonly ends a melody because it sounds complete.

I like to think of the “tonic” like the period or exclamation point at the end of a sentence. You know the melody is finished and ready to move on to another idea.

Each of the other notes of the scale have different jobs as well. As we learn to build chords, you will see

Which notes do we use in chords

Like I said before, to build a chord, we have to have a few notes that sound good together. If you wanted, you could build a chord off of every note of the C major scale.

Let’s try to build a chord off of the first note (the “tonic” note). In our scale above, the 1st note is a C. That will be our starting note (the “root” note of our new chord).

Every other note in this case is the first, third and fifth note of the scale

This is the basic C major chord.

Major chords have a happy sound. If you look at the basic C major guitar chord below, you will see five notes. Even though there are five notes, some of them are doubles. There is: C E G C and E. The same notes that we found from the major scale above with some doubled notes. 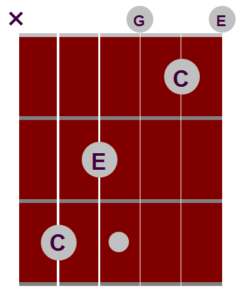 Lets make another chord starting with the second (2) note from the C major scale.

The second note of the scale is a D. This will become the “root” of our new chord.

Let’s follow the same formula as above and get three notes using the every other note process.

Every other note in this case would be:

This is the basic D minor chord.

Minor chords have a sad sound. Let’s look at the basic D minor guitar chord below. There are D, A, D and F notes. These are the same notes we found from above, with the D note doubled. 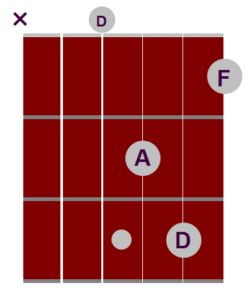 These three note chords we have just built are called triads. Triads are our most basic chords. There are four types of triads. They are:

Each of these types of chords are constructed with only three notes each, but they all have a different sound. The reason they sound different is because the distances between the three notes are different.

These distances between the notes have a name. They are called intervals. If you are interested in going deeper into chords and scales, stay tuned! I have a lesson on intervals coming soon that makes understanding scales and chords a breeze!

What are seventh chords

There is another very common type of chord we need to understand. This is called the seventh chord. Today, we are going to construct a seventh chord from our scale above. Let’s look at our C major scale again:

This chord is called a C major seventh chord. It has a happy sound, just like the C major triad, but the added B note adds a fancy, prettier sound that the triad didn’t have. This is a common chord in jazz and a lot of wedding songs. 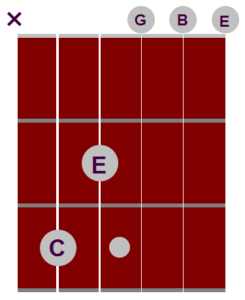 In this chord we have the notes C, E, G, B and E. These are the same 4 notes from the scale above with the E note repeated.

Check out my upcoming article on intervals for info on the different types of seventh chords.

I’m sure you have heard the word arpeggio before. It may sound fancy but arpeggios are actually really simple.

An arpeggio is a group of chord notes played one after another (rather than at the same time like a chord).

They can be played in any order you want as long as they are chord notes. Let’s look at the C major guitar chord below. Instead of strumming this chord, we will play one note at a time. 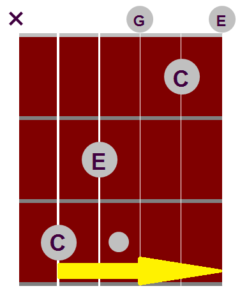 When playing one note at a time across the guitar, you turn this chord into an arpeggio. This is the simplest way for guitar players to play arpeggios. Just take the chord shapes you already know and pick the notes separately. You can let them ring like a harp player or just play them one after another. It doesn’t matter. Either way this is an arpeggio.

Although this is the easiest way to play arpeggios, it is, by far, not the only way. 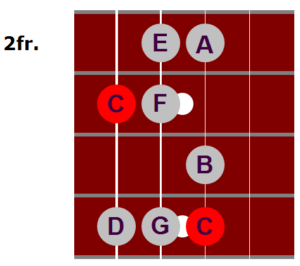 We can play the first, third and fifth notes from the scale in order. Pay attention to the shape of these notes. That shape is important. You can use it to play the major arpeggio from other chords as well. 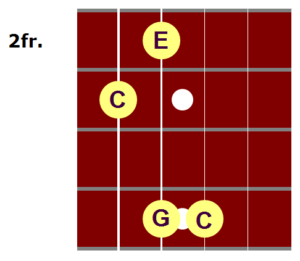 You don’t always have to play them in order. Here is the same arpeggio shape played in a different way.

Knowing how chords and arpeggios are built is an important first step towards understanding the music you love.

Congratulations on taking this first step towards understanding how the songs you love, and want to play, are constructed. You are on your way to understanding why music works. Once you understand that…..watch out… you will be one serious guitar player!

Make sure you check out my podcast all about chords and arpeggios here:  https://www.playguitarpodcast.com/005-really-understanding-chords/