How Do I Make My Guitar Playing Smoother and Cleaner? - 064 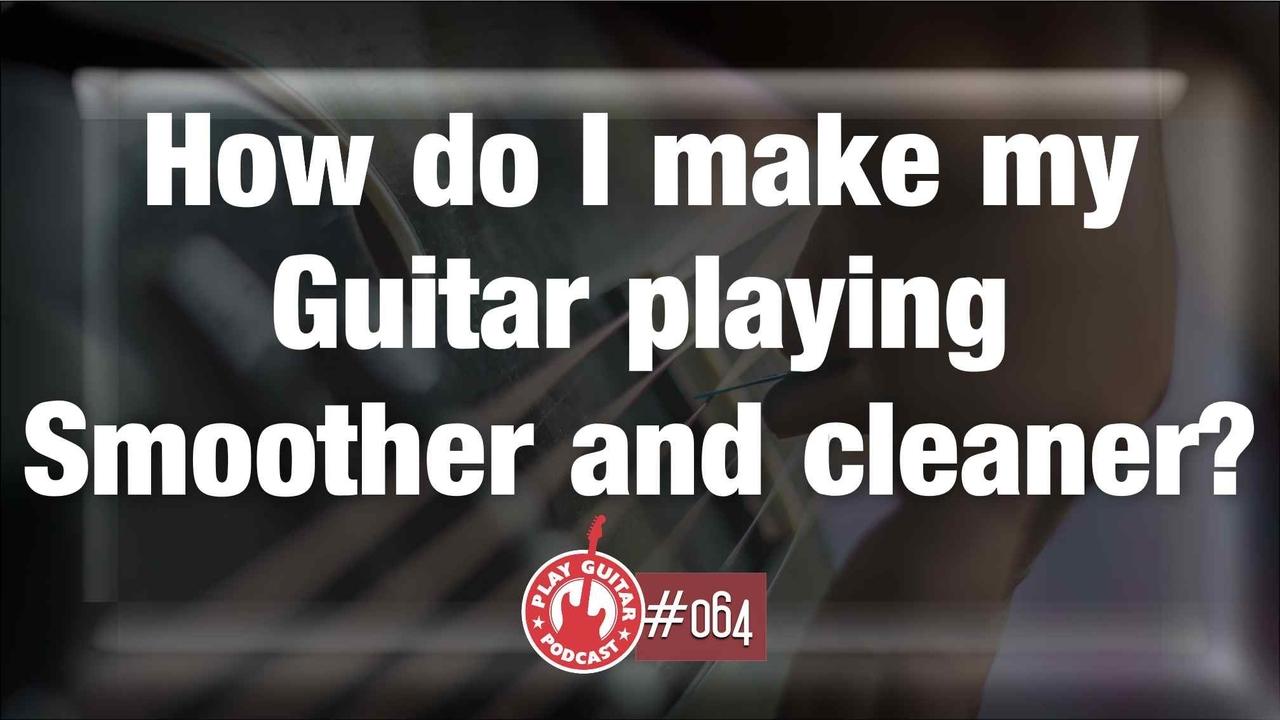 Knowing what to look for is the key to curing sloppy playing!

A lot of players, especially when they first start, have no idea why things aren’t sounding so good.

They try to learn their song or chord progression or lick and focus on the job at hand. When they have successfully gone through it, it’s a mystery why it doesn’t sound like the recording.

Today, I’m going over the most common problems of sloppy guitar playing. They are:

The first category of basic clean playing is:

Taking control of all of the strings.

There are other strings that you need to focus on other than the notes you intend to play. The strings that you don’t want to play are just as important as the ones you do.
Change your approach to picking and strumming by thinking that you are playing all of the strings and intentionally letting some sound and some not.

How do you do that? Easy, you need to intentionally touch but not fret the string.

For example, when you want to play a C major chord (that typically doesn’t allow the Low E to ring) it can be difficult to strum and not hit that low E string.

When you start to learn to bend notes, there are two things that usually challenge a new player: Strength and Contact with other strings

As you slide the string towards the center of the fret-board, you will most likely run into other strings. What commonly happens is your bending finger goes under these other strings

That is a recipe for disaster.

As you bend your string across the fret, and your finger and the bent string go under other strings, it tends to make the other strings buzz and vibrate.

By collecting the other strings under the pad of your bending fingers, you take control of them and keep them silent.

Out of tune notes

Make sure to keep the angle of your pick relatively flat against the string for the cleanest sound. When you angle the pick, you will get less resistance and more speed but you will also get more noise that can sound sloppy (scraping sounds on wound strings).

Issues when sitting down to play

This angle, where your arm is coming closer to being parallel with the neck of the guitar, makes it very hard for correct hand position.

Your fingers have a tough time coming straight down on the strings.
This makes is so hard to fret notes cleanly. It’s almost like you are laying your fingers across the strings instead of coming down straight on top of them.

By getting the neck raised higher, you create a better arm angle for your fingers to come straight down on the strings.

I like to use a strap, even when sitting and playing, even if the weight of the guitar is still on my leg. It makes it easier to keep the neck up.

Some like to use a foot-stool for the leg that the guitar is resting on. It lifts the guitar up and gives you a better arm angle to play with.

Issues when standing up to play

When standing, arm angle is still an issue. The higher the neck is, the easier it is to play cleanly. By adjusting your guitar strap higher, the better the angle.

This is usually a give and take because of the way the guitar looks when it is raised up high.  Up too high and you may look strange, but if your lower the guitar down too low, the guitar becomes very difficult to play cleanly.

So let’s say that you have your posture and arm angel correct, but you are still having trouble playing cords cleanly. It may be that your notes are not ringing correctly.

Getting the finger right behind the fret is optimal but not always possible.
It’s always a give and take between the rest of your fingers when forming chord shapes.

What if the notes you want to sound are muted or unwanted notes are soundings? You have to start experimenting with finger placement to clear them up.

It may be that you are too far to the left or the right and you are accidentally touching other strings.

Holding the pick to tightly and pushing the strings out of tune.
Your rhythm is off.
Which leads me to the next section.

Rushing (playing faster than the tempo of the song) is an extremely common problem for all levels of guitarists. Mostly because rhythm is seldom a focus of guitar study.

Slowing down can be a problem too, but not nearly as much as speeding up.

Have you ever noticed that live versions of songs are faster than recorded ones. Or, that these songs start at one tempo and finish at a much faster one. The adrenaline rush a player gets when performing for a live audience is notorious for speeding up the tempo of a song.

Finding the right groove in a certain tempo doesn’t mean to go faster.
When you hear a musician playing in the groove, at the right tempo, it’s awesome.
Really understanding when your notes are supposed to happen.

Practicing with a  metronome is a great way to train yourself to stop rushing.

Forgetting how many times to play a chord or chord progression is something that is usually seen with new guitar players.

The remedy for this is when you are learning your first songs, break them into chunks.

Find the raw elements of the verses, choruses, and bridges and practice these

sections over and over until you can feel, or anticipate when a progression or section is about to end and a new one begins.

You get a much clearer picture of your playing when you aren’t worried about what scales and chords you are playing. That is why keeping video logs of your practice is so important.

It becomes easy to find some things that you need to work on that you may not have realized were needing attention.

My challenge for you today is to setup some sort of camera and a metronome, pick two songs (an easy song and a challenging song)
and film your performance.

Later,  sit down and watch them both critically. Be conscious of these things when you evaluate your playing:

It doesn’t matter what level of a guitar player you are. I’m sure that you will find a few areas to clean up in your playing from this exercise!

So, today we went over how to make your guitar playing smoother and cleaner. We got into the basics of clean playing guitar and focused on positioning, chords, and rhythm. And finally, I left you with something that you can take action on right away to help make your playing better.

Are you frustrated with sloppy playing? If so, we would love to hear your experience in the comment section below!

Thanks to John Schmitz at Sure Grip Guitar Picks for including us in his best guitar podcasts list. You can see it here: