Store About Us Podcast Login 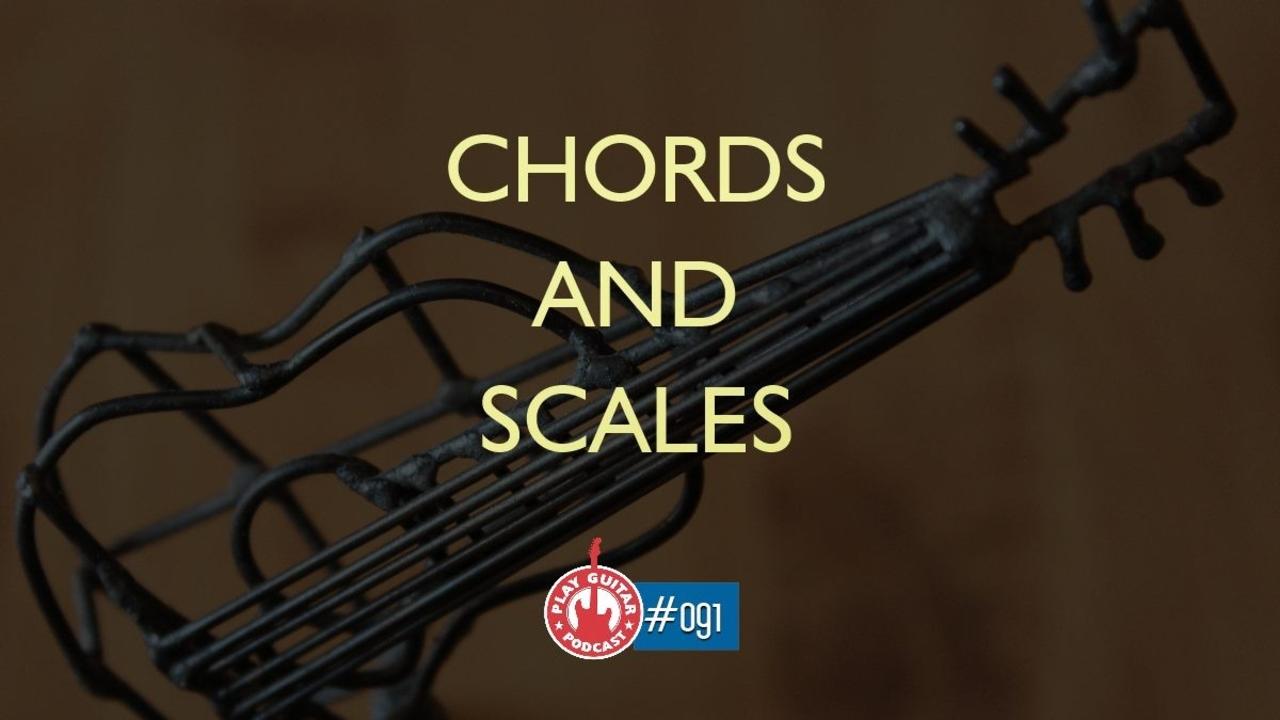 Do you really want to speed up your progress?  Instead of pushing and forcing yourself to move forward by a few inches, try spending some time to look back to some of the basics you may be missing.

Sometimes it could be the approach that you have taken from the beginning that’s holding you back. I see this very often with guitar players.

Why do guitarists learn chords first? Most likely it’s because new guitarists want to play songs as soon as possible. Chords are the quickest way to get started with songs. I think it’s a good idea and I teach my new students chords first.

What I’ve noticed with my students that are having trouble starting lead guitar is that they don’t really understand the relationship between chords and scales. Because they started with chords first, they try to relate everything back to the chord. This causes a lot of headaches along the way.

If this sounds like you, don’t worry. Just having a little knowledge about how chords and scales are related can change everything. This is one of those light bulb moments for a lot of frustrated players. In the next four steps, I’ll give a broad overview (30,000 foot view) of the scale/chord path, and sort this out for you, so you can get back on the learning fast track.

A collection of notes

Something very special happens when we hear these collections of notes. Our brains react to different collections differently.

These collections have an effect on us. They can make new or trigger old memories. You hear a song and it’s like you were right there where you were 15 years ago. They can make you feel a certain way, sometimes whether you want to or not. And when you add rhythm to the mix this effect amplifies.

Notes are our currency in music. They are everything. They are the basic building blocks to music and they are our starting point today.

As you teach, over time you find things that end up being repeated a lot. Some things are worth repeating.  This is one of my bigger ones that, if you have been listening to me for some time, you most likely have heard before.:

What came first, the Chicken or the egg? There is no real answer to that question. But, in music we do have an answer to whether the chord or scale came first: it’s the scale.

Once you can visualize that, you have something to grow on.

So, having a note is easy but as soon as you add another note to it, things get more complex. Once you start getting into how notes relate to each other you need some sort of system to go by.

Finding a group or collection of notes that sound good together is how we build our scale. You generally see the structure of this grouping of notes by intervals… distances between notes.

The different arrangements of these intervals create different sounding scales.

Playing through the grouping of W W H W W W H gives us our major scale and what is considered a happy sound. There are other groupings with other interval formulas that make up very different sounding scales.

Once you have your group of notes, the first thing is you can make is a melody. When making a melody you are using the notes from the scale in a way that is (hopefully) pleasing to the ear. Using different rhythms, pauses, directions, and devices, a melody is created like a sentence. The most important note of the scale is the tonic note. This is the note that determines the key of the melody and has the most final, grounded sound.

The way you interpret this melody for maximum effect is called phrasing. Slight alterations to the rhythm and articulation can create a mood and make your interpretation of a melody unique.

You can also get more mileage out of your scales. By changing the tonic note of a scale to another one of the group, you get a completely different sounding scale.

One of the great things about playing guitar is the way scales are laid out. A Major scale has a definite pattern across a certain position on the guitar. Once you know the pattern of the scale you are trying to use, you can slide these patterns to different positions of the guitar to play that same  type of scale in different keys.

Now that we have worked our way from notes to scales, the next step is to create some chords.

What is a chord?. Well, where scale notes are played one after another, a chord is a group of notes that are played at the same time. For basic chords, these notes need to be strong and compliment each other.

Where do chords come from? The notes that make up a basic chord come directly from the scale (chicken and the egg.. remember).

Ok, so we have our scale and we know our tonic note, how do we create a basic chord? This sounds like it’s going to be difficult, but it is really extremely easy. We choose every other note.

An extremely basic chord is a major triad (a happy sounding chord that uses three notes).

To find the three notes that make the C Major chord, start with the tonic (1st) and skip to every other note: We get C, E, and G. We skipped d and f. Simple. If you check the notes in your C major guitar chord you will find C, E, and G (sometimes the notes will be doubled).

Now we have a group of notes (scale) that match our new chord. They match well because they share the same notes. Our chord was created from the scale so you know they should match perfectly.

Try to play our scale from one note to the next while the chord is being strummed. It should sound pretty good. You may notice that some notes sound stronger than others. Most likely those notes are the ones that we built the chord from.

The word arpeggio gets a lot of attention from new guitarists. What is it? It sounds fancy.

An arpeggio is super simple as well. Do you remember skipping the notes to build our C Major triad? Those notes are also an arpeggio. The way it’s different than the chord is just how you play them.

An arpeggio is playing the chords notes one after another instead of at the same time.

When you played the scale over the chord you noticed the strongest sounding notes were the ones that you created the chord from. So when you are playing your scale, you should have a good idea now which are the stronger notes (chord and arpeggio notes) and which are the weaker notes (the rest). Having this knowledge of strong and weak notes from the relationship between the chord and scale is super important in creating your own melodies, licks, and improvisations.

So now that you have a general knowledge of this relationship, let's put this into practice.

Finding chords for your melody

Say you have a melody that you like to play from a certain scale, but you don’t have any chords to go along with it. How would you come up with a progression of chords that compliment your melody?

Well, if you have the scale, you already have the chords you need right there in the scale. The most important chord to find is your one chord.

That is your chord that is based on the Tonic of the scale. If you are playing a C Major scale that chord would be a C Major triad. This is a great starting and stopping chord.

Once you have that, you can build other chords from other notes in the scale. You can build a chord off of each note of the scale by the same process. That would be seven different chords that you can choose from (diatonic chords).

You can experiment with different combinations of these chords to come up with something that works under your melody, or you can pay attention to the notes in the melody and choose chords that contain those same notes to play at at that time.

Say you have the opposite problem. You have a great chord progression that you love to play, and you would like to make a melody, play a lick, or improvise over that progression.

What do you do?

Well it revolves around finding the tonal center of the chord progression. Finding the one chord.

What chord do you play that makes your progression sound finished? Most likely that will be easy to find, but not always.

If you are unsure, just do a quick experiment. Play your progression and choose a chord to stop on. If when you stop playing, the progression doesn’t sound complete to you, that’s not the ONE chord. Continue experimenting until you find the chord that gives a satisfying end to your progression.

Once you find your strong one chord, determine what type of chord it is (Major, Minor, Dominant). This will show you which scale to try out. C major one chord try a C Major scale. C minor one chord, try a C minor scale.

Play a recording of your chord progression and play your scale over the chord. I’m sure it will match perfectly. If not, go back to step one and make sure that you haven’t picked the wrong one chord.

The relationship of chords and melodies is not as hard as you think. It’s all about matching and as you farther along on the guitar, its about how much you want to match them together.

This 30,000 foot view of the progression of chord/scale theory is important to have. If you have ever struggled with not knowing what chord or scale to play, or which one is appropriate for a certain situation, going back to this workflow of how notes create scales, and how scales create chords will give you a process to find what you need every time.

In this show we went over the four main areas of guitar scale/chords theory. They were:

1.A collection of notes

If you are just starting out on the guitar or have been playing for a while but you are unsure if what you are learning is correct, I strongly suggest that you head over to playguitaracademy.com and sign up right there on the front page. I have something very exciting coming in less than two weeks that will really help you.

When you sign up, I’ll be in touch over the next week or two with a lot of exciting news. Plus you will also get my practice space checklist, that will help you create the best environment for your practice sessions, that’s distraction free and optimized for stress free learning