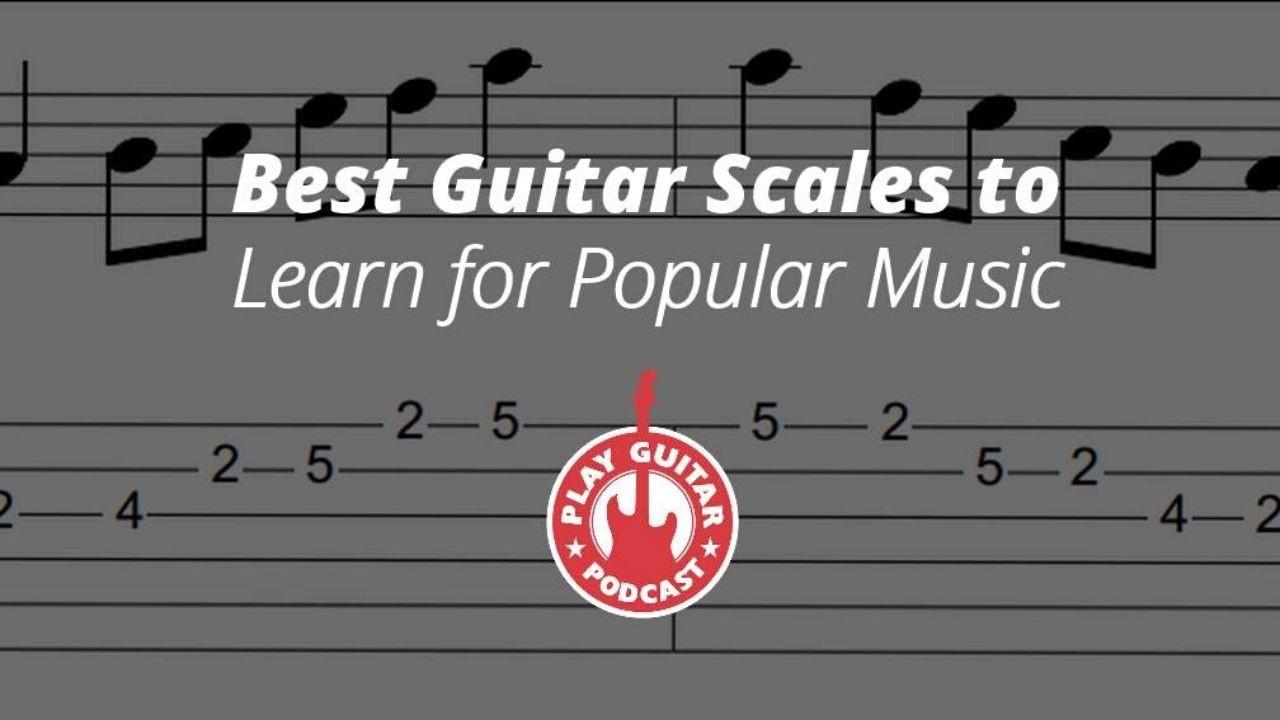 Welcome to Part 2 of “my six step plan to learning guitar scales”.

In Part 1 we went over all of the steps in my plan to get started with guitar scales. They are:

In Part 1, I also went through Step 1 and 2. We learned all about how the fretboard works and how scales are built.

If you haven’t already read Part 1, I suggest you click the image below and check it out. 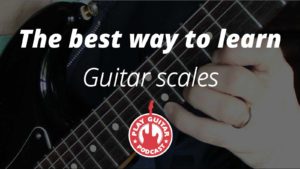 The information in that post is super important and sets up what we are going to go through today.

What are the best guitar scales to learn first on guitar?

When I’m playing or teaching popular music, I always focus on the Big Four:

If you have listened to any popular music, you are familiar with the sounds of these scales.

The Major scale is a happy sounding scale that has seven notes. Most people relate the sound of this scale to the “Do Re Mi Fa So La Ti Do” song.

The Natural Minor scale is the most common scale to play to get sad sounds. It is a seven note scale as well. You will also find the Natural minor scale in a lot of hard rock songs.

The Major Pentatonic scale is a slimmed down Major scale. It is a five note scale that is used in Country, Southern Rock, Soul music, and some blues.

The Minor Pentatonic is a slimmed down Natural minor scale. It is a five note scale that is used primarily in Blues and Rock music.

Being comfortable and confident all over the neck of the guitar with the big four will give you most of what you need to play lead guitar in popular music.

But not only that! Knowing these scales can also help you with:

What is the major scale and what does it sound like

The major scale should be very familiar. This is the “do re mi fa so la ti do” scale. It has a very happy sound and matches perfectly to major chords.

In my article on “How to build chords and arpeggios”, I showed the c major scale. We gave each note in the scale a number and we constructed chords with certain notes from the scale.

Today we will find out why each of those notes are in the C major scale. The way to find that out is by using our whole step (Major 2nd) and half step (minor 2nd) intervals.

How do you build a major scale

The formula to build a major scale is:

What in the world does that mean. Well, lets take a look at the scale we built on the A string in Part 1.

First, we slid up 2 frets between the C and the D note. That distance is a whole step. (Below, see that W = a whole step and H = a half step.)

Next we slid up another 2 (whole step) to the E note.

This time we moved up just one fret to the F, a half step

To the G was another whole step

To the A was another whole step

To the B was another whole step

And finally, to the last C, we moved up a half step

Going through these steps, one by one, easily shows how we come up with this formula…

…But the really cool thing is that this doesn’t just work for C Major. It will work for any Major scale.

Go ahead and Pick any note. Preferably closer to the nut of the guitar since we are doing this on just one string. Start working your way up the neck using the W W H W W W H formula. Sound familiar? It is the same “do re mi” sound, just now in a different key.

Scales are not only played on one string.

After reading my article on “How to learn guitar notes on the fretboard”, you know that the notes on the guitar strings overlap each other mostly on the 5th fret of each string.

This is awesome for us.

This will allow us to play our scales in one position with out having to move our hand up and down the neck.

To make this even easier for us, there are patterns that follow the ” W W H W W W H” formula in each position of the guitar neck. These patterns are readily available across the Internet for all of the different scales.

A lot of players memorize these patterns without understanding what we have learned above.

It is not enough to just know the patterns without understanding the reasoning behind them. This can be a big stumbling block to players who are trying to master lead guitar.

We will take a look at some of these scale patterns in my next post:

“How to play guitar scale patterns”.

When would you use the major scale

Using the the Major scale to find modes.

Another big use for the major scale is to get our modes. You can think of modes as “child” scales that come from the “parent” major scale.

Simply, you play the same notes of the major scale but change the starting note. So, instead of playing:

You would start with a different degree of the scale. That note would become your new Tonic (or strong note).

Using the D as our new tonic, but keeping the same notes as the C Major scale gives us a new sounding scale. This is called the Dorian mode. It has a “sad but jazzy” sound and is used in several different styles of music.

Playing modes is a huge topic. I don’t want to get too far off track here. This subject is definitely worthy of it’s own article….so stay tuned for an article on modes in the future.

What is the natural minor scale

The natural minor scale is our most common, sad sounding scale. It is used in all styles of music.

How do I build a Natural minor scale

There are several different types of minor scales. “Natural minor” is the easiest one to build. We just take our C scale that we built above and change the tonic (starting note) to the 6th degree of the scale (The A note).

“Wait….That sounds just like those “modes” you were talking about.”

Another name for the Natural minor scale is: the Aeolian mode. This mode starts on the 6th degree of the major scale.

OK, lets try that out.

When would you use the Natural minor scale

What is a pentatonic scale

The pentatonic scale (a hands down favorite of my students) is a simple scale that is made up of five notes. We like to call it the scale of the people!

Why did the notes of the pentatonic scale resonate with such different cultures enough to base their folk music around it? Lets take a look.

You saw above that the Major and natural minor scales both have seven notes. We actually get the pentatonic scale from these seven note scales.

To form the pentatonic scale, we just remove two of those notes. This leaves the strongest most consonant notes and removes the weaker ones. Because only the strong notes of the scale are left, people (no matter where they come from) tend to find the sound pleasing.

The fact that so many separate and different cultures found the notes of the pentatonic scale pleasing enough to base their folk music around them proves to me that music is indeed a universal language.

Let’s take a closer look at these scales.

What is the Major Pentatonic scale

Earlier we gave the C major scale a set of numbers. They went from 1 to 7. After that, the next note went back to 1.

To build a Major Pentatonic scale we simply remove the 4th and 7th notes.

That leaves us with this:

This leaves the first, second, third, fifth and sixth notes. What we are left with are the strongest sounds of the major scale:

You hear this scale all of the time in Country, Folk, Southern Rock and Blues music. It has a happy, warm and care-free sound that just feels good.

What is the Minor pentatonic scale

Earlier, we built a Natural minor scale. The scale we built was an A natural minor. If you remember, we used the notes from the C major scale and just changed our starting note to the A.

Lets go ahead and remove the same two notes (4 and 7) that we did with the Major Pentatonic scale.

That leaves us with the A, C, D, E and G notes… The A minor pentatonic scale!

The minor pentatonic scale is extremely common. It’s in so many of my students favorite songs that I usually teach this scale first when they start learning lead guitar. Rock, Blues, Jazz, even folk and Country music are filled with this cool scale.

It can sound cool and aggressive or sad and introspective depending on the style of music and the way you play it.

Whether you are just starting out on lead guitar, or have been playing for a while, understanding what scales are and why they sound the way they do is very important.

Just memorizing scale patterns is only part of the battle.

Today we learned what the “Big Four” essential scales that you need to learn first to play popular music. They are:

We also found out their basic sound, how they are constructed and the best ways to use them.

Now that you understand what theses scales are and how they are built, continue on to Part 3 to start using them with easy to manage scale patterns that will help you get the sounds you need all over the fretboard!