How to Make Your Guitar Solos Sound Better - 014 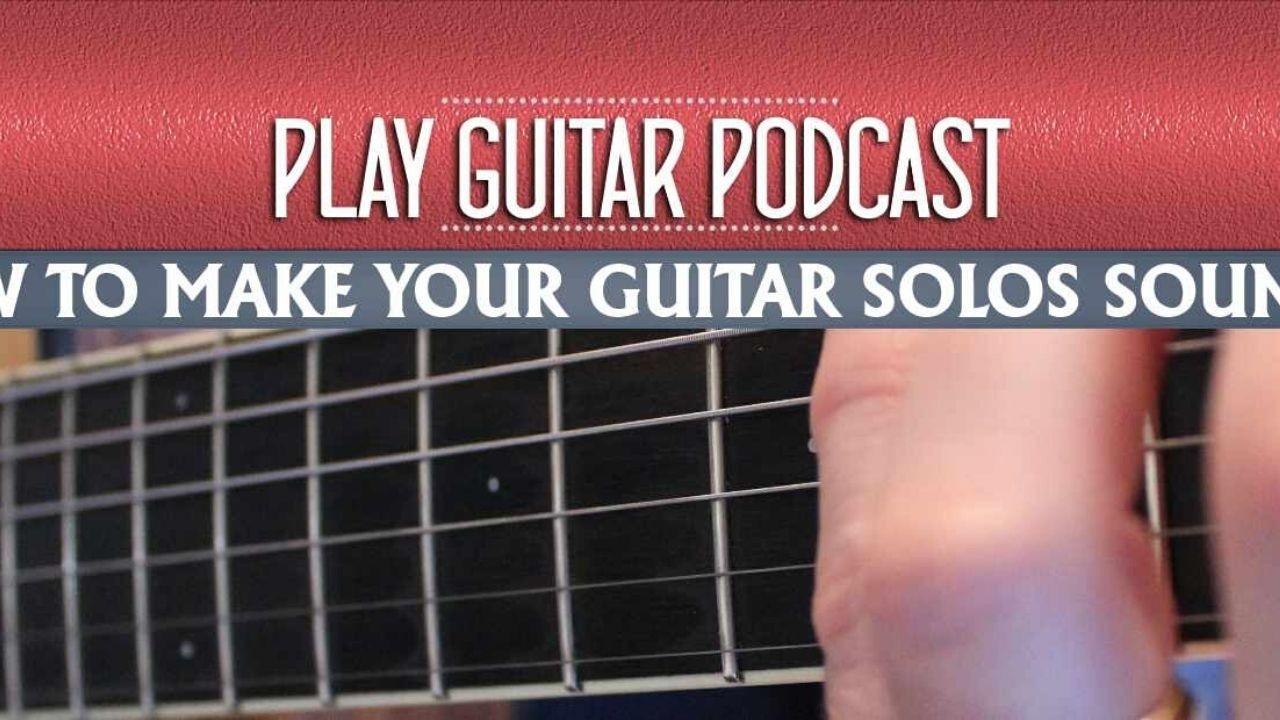 Today, I answer the question: How do I make my guitar solos sound better!

On todays episode titled: How to make your guitar solos sound better, I take some time to really understand the things that are holding lead guitarists back.

Have you ever struggled with lead guitar? Don’t answer that question. I already know the answer. I think we all have. It’s not easy. There are a lot of skills and thought processes that have to come together to become effective at lead guitar.

There are very few, if any players that just pick up a guitar and start wailing.

It takes time and some work to get to the point that we all want to get to. Effortless, spontaneous creation of cool leads. Doesn’t that sound awesome.

Just pick up the guitar and magnificent sounds just come forth. I guarantee you that your favorite guitar players didn’t sound that great when the first started learning lead guitar.

There are just some things that you have to go through to get to the other side of the game.

Today I’ve pulled together a lot of the problems that frustrate lead guitar players.

I’ve done a little organizing of these problems and boiled them down to 4 main areas that frustrate lead players.

I also go into the main problems of each and offer ways to get past these problems and bring your lead playing up to the next level.

A lot of great questions and feedback this week!

The first is from Andrew.

He wants to know about diminished barre chord shapes based off of the E Strings.
Diminished chords are tricky.

First is to know the difference between the diminished chord (triad) which is not used very much, and the Diminished 7th chord, which is very common. The Diminished chord is a triad made off of the 7th of the major scale, In the key of C, that would be a B diminished triad (with the notes B D and F) Even when you play this diatonic chord with other diatonic chords, it sounds kind of “off”. The more common chord is a dim7 chord. In the key of C that would be B D F and A.

No matter whether you are playing dim triad or 7th chord you don’t really find a whole guitar chord pattern for diminished. Usually it uses either the top four string or the inside four or patterns that use a string here skip one and then a few.

There is a dim7 chord pattern that does use the low e string and then the D G and B strings. A C dim 7 chord in this voice would be E8 d7g8 and b7. It will slide up and down like all barre chords but it has one really cool difference. It repeats itself every 4 frets, so play the C at the 8th fret , 11th, 14th and 17 th. All the same chord just in different inversions.

Thanks Andrew!
Look forward to more on the dim chord in the near future.

Carlos V. gave the show a nice compliment. Thanks Carlos!

Douglas who enjoyed the last show that gave an introduction to playing outside. I really enjoyed bringing that one too.

It’s always tricky finding a way to start getting into tension notes. I have found the minor pentatonic scale when played over 7th chords to really be a great first step into the world of outside notes.

Once you understand that it’s really just about getting comfortable and familiar enough with these other sounds to play them confidently, it’s off to the races. And the minor pentatonic scale over a 7th chord is a great way to start playing with tension.
Thanks, Douglas

Chris W. Also enjoyed the last show and we have been back and forth about a few other things this week. So much fun to keep up with you! Thanks, Chris!

Thanks to Adam L. For linking to my “really understanding guitar scales” post this week on Twitter and sending a great message. I really appreciate it!
Thanks again Adam

I received another great message from Wayne this week!

He had his first lesson with a guitar instructor this week and I had asked him to keep me updated. Let me know how it went.

The student teacher relationship, especially when it comes to guitar is an interesting one. Not every teacher is right for every student. I know that that first meeting can be .. Lets say interesting. You have an idea of what to expect, the teach has their own method (hopefully) that they have found effective. Sometimes that fits perfectly and sometimes it doesn’t.

Sometimes it just boils down to personality. And especially when you are a beginning guitarist, and you haven’t done this before, maybe you just don’t know what to expect.

What I will say is that, it’s awfully hard to get the full picture in one lesson. Usually after two or three you will start to see exactly what you are in for.

Teaching off the cuff may work great for a certain students and may be your preferred way of teaching. More power to you. If the student is progressing, awesome. But for me, there needs to be at least some sort of method or structure to be effective. Just my 2 cents.
Thanks for the message Wayne.

And finally, I got a great message from Alan this week.

He is interested in learning about good playing techniques. The physical part of playing guitar, and correcting some bad habits. Yes I’ve been dealing with a lot of this lately and what a great Ideas for a show or video. Stand by for that one Alan. I can see that one coming up in the near future.

Thanks Alan and everyone for contacting me this week. This is really turning out to be a lot of fun for me, so keep your questions and comments coming in to feedback [at] playguitarpodcast [dot] com and on twitter to playguitarpdcst .