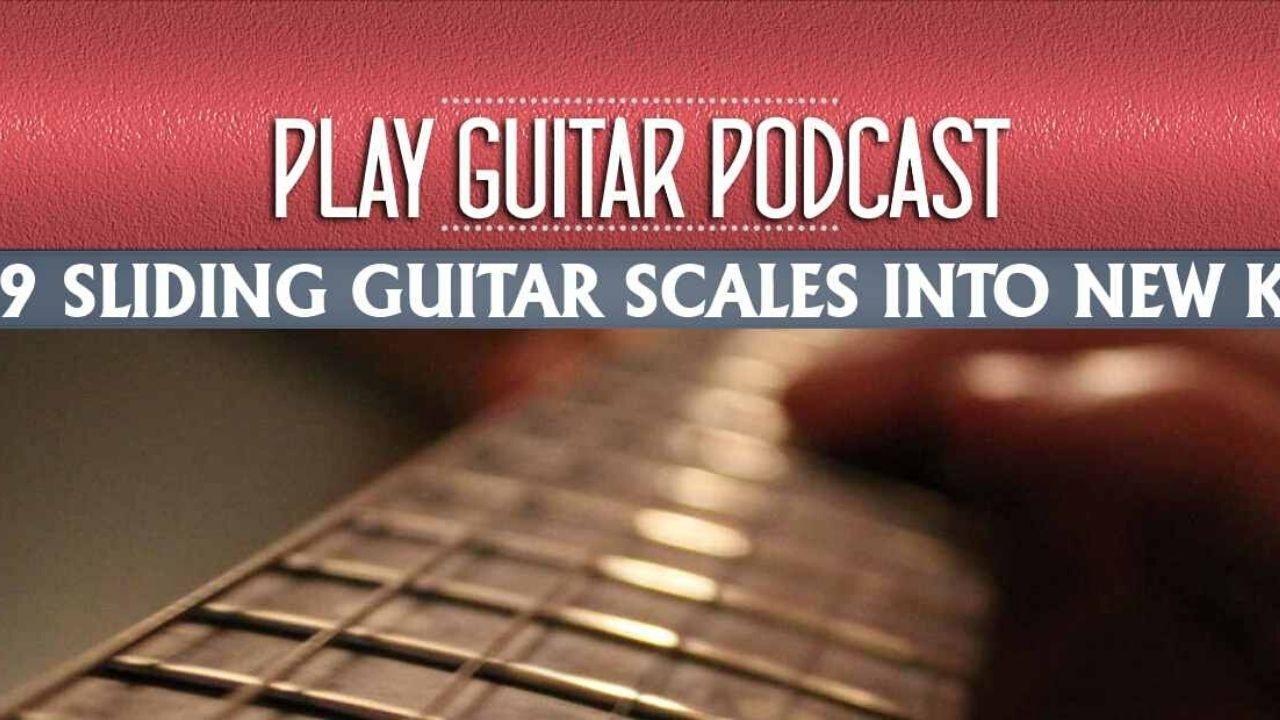 Today, I start sliding scales patterns around into different keys. You can get a lot of mileage out of just one scale pattern!

On todays episode I’m on the last step of my Six Essential Steps to Really Understand Guitar Scales. It has really been fun working my way through this guide.

It has turned out a lot better that I hoped it would. Splitting it up like this has allowed me to really explore all the foundational things you need to move forward with guitar scales.

On this last step, we take the scales we have learned and start moving them around. Sliding them into different keys so that we can use them in lots of different song and styles of music.

Although you don’t need to have listened to the previous shows to get a lot out of todays episode I do recommend, at some point, going back over episodes 6, 7, and 8 to get all of this really helpful information. You will be glad you did.

And, checkout the complimentary blog post to this program, www.playguitarpodcast.com/keys. It has some scale charts that could help some of you start moving these patterns into new keys.

Other than that, What a month it has been. Coming to the end of this first month of the show, I would like to thank all of you for listening. It’s been a busy month with the new podcast and all of my blog posts, but it’s been a lot of fun.

I also wanted to congratulate my winter quarter students and wish them good luck with our winter concert coming up this weekend. They have been working hard on all of their songs all quarter and we are ready to go! Our backing band is ready to go to. I’m excited. These are allways really fun and I’m really looking forward to this weekend. I’ll report back on the show next week and let you all know how it went.

Well, let’s get on with the main topic today Sliding Guitar Scale Patterns Into New Keys.

For full information about today's main topic, click this image to check out the complementary blog post to this episode: 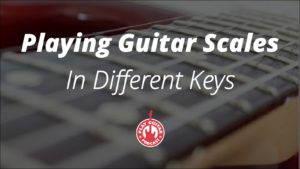 Since the podcast started at the beginning of February, a little less that a month ago, there have been a few ( actually a lot) of surprises along the way. I’ve been wanting to start this show, honestly for years. In fact about four years ago, I recorded two episodes.

They were pretty rough, but I loved recording them. I still have them and I may put them up sometime for a laugh. Right after that my house sold and I relocated a considerable distance away from where I was.

Getting in to a new area, starting up my teaching studio and just general family stuff. I just didn’t feel I was in the right place to give the show the time it needed.

But ever since then, podcasting has been part of my daily life. I just couldn’t let it go. I’ve spent my free time learning, and understanding the medium.

Well to make a long story short, I felt that when I finally was able to commit to this show, I thought I knew what to expect. I’ve heard how shows start and it takes a long time to get going.

I’ve also heard about some shows that just go crazy from the get go. I had prepared myself that it was probably going to take a while before things took off for this show.

What did happen, and what surprised me, was that I have had a very solid start here. There have been a good and increasing amount of downloads this first month, and , I have had a lot of great questions and feedback. You hear of a lot of beginning podcasters who don’t get any feedback at all and aren’t sure if they are helping or entertaining anyone.

So, if you have a question that I can help you with, you can always email me at feedback [at] playguitarpodcast [dot] com, use the comments on the show notes page, or use the contact form on the site.

But, the coolest way to leave a question for the show is by my speakpipe voicemail. When you go to the main page of playguitarpodcast.com, to the right of the screen you will see a button that says “send voicemail”. That will allow you to record a short message for me to use on the show. You can also get to this voicemail on my contact page. And speaking of that, lets get into a question I received this week from a listener.

I received a great question this week by speakpipe, but I didn’t get an email address with it, or any way to contact this person. I wanted to get his permission to use it on the podcast so I could answer his question. So I hope he will contact me so I can play it for you.

But basicly the question was that he is really working on scales,chords, knowing the fretboard and vibrato, and tabs and other peoples parts. He’s having a hard time using all of this in a way that sounds like himself.

I really want to help him so I’ll answer his question and hope fully he will get back to me so I can get permission to use his clip on the show. Because it was a great one.

Thanks for the question. This is really the big situation we are in right now, and I deal with this a lot, and It doesn’t matter what age you are, It’s across the board.

Take a listen to episode one and I give you my opinions about all of the great resources we have for learning guitar now and the actual results people are getting.

I see people who are able to play some really cool stuff, but they don’t know what they are doing and why they are doing it. There is so much more to playing the guitar than just numbers on a page. One of the reasons I included this today, is that I know that this could help a lot of people.

But for your specific situation, it sounds like you are up and running and motivated, which is awesome. But, you are in that rut where just piling on new scales and techniques, you know… more suff, isn’t getting you where you want to be.

Let’s take what you have learned already and start to make some music with it.

The first thing I recommend is to start being intentional with your practice time. Let’s split it into two parts.

Let’s start simple. Find a blues background track in the key of A. Let’s limit our selves to playing one scale pattern over this. Play the A minor pentatonic pattern one over this whole track. Don’t try to get fancy and move into other patterns. Here are the rules.

Now move on to another phrase, and when you are done, hit the tonic note. There another phrase. What happens if you don’t hit the root. Well that is just like putting a Question mark at the end of a sentence. It doesn’t feel finished and needs another phrase to end it.

That is the beginning steps I teach all of my students when learning to improvise. And the all sound different when we do this. They all sound like themselves.

Another piece of advice I like to give is something I got from a Warren Haynes interview, a long time ago when he was with the Allman Brothers. He said something to the effect of that he doesn’t really use thousands of licks when he plays.

What ever the change is, when you change it it becomes a different lick. You could take one lick and create hundreds of new ones, that all sound like you, from one initial idea.

So to put this into practice, just find a lick you like to play, It could be from another guitarplayer you like, or just something you came up with. Put on a looped chord or backing track that matches it, and start tearing it apart.

Make one part longer, repeat a few notes, whatever. Every time you change it, it now becomes yours. You never know, you just might stumble across the next great guitar lick or riff.

Thanks for the question and I hope I have helped you out a bit. I didn’t get your email. Please contact me so I can follow up on your progress!

I also want to thank Chris Ward for a great conversation on twitter this week. He has been taking advantage of the scale patterns up on my blog this week and making the transition from pentatonics to the full major and minor scales. Doing some looping and really paying attention to where the tonic notes of the scales are. Thanks Chris and keep us updated on your progress

So that’s my new segment Listener feedback. I’ve had a great time, and this is really my favorite thing to do, help you get out of a rut and on to great things.

Let me know in the show notes what you think and if you have any questions or suggestions.

If you have been listening to the show, you know that one of the things I thought might be interesting was to bring you along on the process of recording my album.

What I am doing now is gathering 10 core ideas, that will give a direction and a basic sound to what I am putting together. Today I have number 10. This is a test clip that I make while trying out sounds from my line6 hd500x. I just did a groove and put some slide guitar over it.

It’s kind of nice. It needs a lot of work but I though it would bring a different vibe to the group of songs without being too drastic of a change. I’m looking forward to tearing that all apart and making something out of it. I haven’t heard this one in a while and I don’t think the hd sounded that bad. I know I was struggling with it when I first got it, but the tones are definitely usable.

So there it is, the last idea in the group. Next week I’ll play all of the ideas back to back and start working on one of them. I’ll create the form of the song and add any parts needed. I haven’t yet picked out which song I’ll start with. But I’m excited to get to this this week!